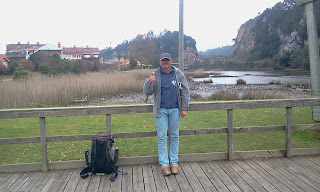 Tario keeps popping into my consciousness.

Maybe because the post never published at the time. Maybe because of all the pilgrims I met, he declined to identify as one. I never discovered whether he had ever walked to Santiago or Rome.

It was walking along the riverside path outside Ribadasella … he called out “Hola, peregrino” from the picnic spot where he was cooking his lunch. Invited me to join him for chicken stew. I declined having just eaten in town (didn't get into the vegetarian question … or where he had found the chicken).

He had no English, so verbal communication was limited by my very basic Spanish. However, we were connecting on a more fundamental level .. . where the language barriers are transcended somehow.

Tario had two little dogs and his stuff in a small trailer, which he pulled by hand. Seemed to sleep out mostly, though was aware of the local albergue where I was headed and looked clean, so perhaps called in for showers and laundry from time to time.

When asked if he was a peregrino or pilgrim, he laughed and said “ no, just a wanderer”. He has been walking about, sleeping out, living free for the last eight years … the eyes showed a contented soul.

Since the next adventure wants to be the Camino del Norte from Irun to Santiago and on to Finisterre, perhaps we will meet again.

Steve
born: 1950 in Fordingbridge, Hampshire, England, UK, Europe, Earth .... not particularly attached to any of them except the Earth ... identification with countries leads to war,so best avoided ...